THE WORLD ACCORDING TO LOUANNE... 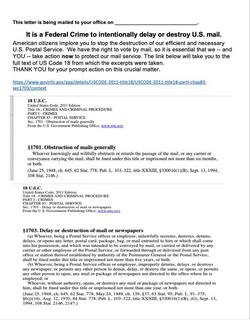 I just drafted a letter to send to my Senators and Representatives, urging them to take action immediately to protect the U.S. Postal Service. It is actually a federal crime to willfully delay or destroy U.S. mail - but that is exactly what Donald Trump and Postmaster Dejoy are doing. And they are doing it in plain sight and admitting their crimes.

I am willing to overlook a lot of things because I realized that politicians are always going to make some decisions and take some actions that are in their own best interest rather than that of the country. I'm sure there are a few stellar souls who always put country first, but they are definitely rare. However, I am not willing to overlook, rationalize or excuse blatantly criminal behavior that is not only criminal in it's action but criminal in it's intent - to prevent Americans from exercising their right to vote by mail.

If you would like to read the U.S. Code, here is a linkL

And I am attaching a jpeg copy of the letter I drafted in the hopes that you will copy it or draft your own and send it to your own representatives. I am going to call them, as well. And I am going to call other Senators and Representatives from other states - I'm going to call at least a dozen who I have seen on TV and who have demonstrated integrity and honor. It is my hope that those people will at least glance at my letter or listen to my phone call and realize that I may not be one of their constituents, but I am their neighbor.

According to news reports, some states' attorneys general are filing charges to prevent the destruction of the USPS. And protests from American citizens have stopped some states from removing drop boxes. But that isn't the biggest danger. The big danger is the removal of sorting machines that allow one machine to process mail as fast as 30 humans can do it. That's important. And we need to be adding MORE sorting machines in preparation for the election, not less.

So, my hope is that you will be inspired by this blog to take your own action. Together, we can make a difference. We can convince our elected representatives to take action on our behalf. We can insist that they do their jobs and listen to the people who elected them.

Thanks for reading this and thanks for whatever action you can take.

Thanks for your service, LouAnne.

Thank you so much for doing this LouAnne! My father once worked for the Postal Service so all I respect all Postal employees always. I really do hope we get a new president. In my honest opinion, I don't believe Trump has done one thing to help our country. It's so awful being filled with all of this hatred and violence. Hope for better things and for a better tomorrow as well. Leanda.